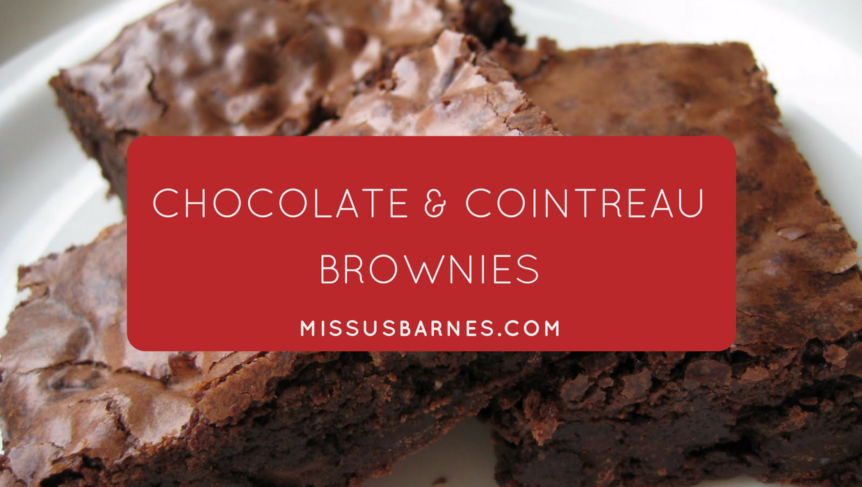 As you may remember, last year I was a bit unwell and I was fortunate enough to have my mummy come and stay to look after me ( three cheers for mummies everywhere!). She knows I’m partial to a bit of comfort food and so she packed our cupboards and pantry with all manner of exciting things. Even though she left at the start of November and we have since moved home I was delighted to find a little blue box of White Wings Chocolate Chunk Brownie mix.

hmmmmmm do I want Choc Chunk Brownies. . . or do I want a little more . . and as I stand in the kitchen fondly thinking about my mum I see that the orange tree has a couple of oranges on it . . . ooooh and what else did my little mummy bring me . . a bottle of lovely duty free Cointreau. As an aside, if you haven’t tried Cointreau before then I strongly suggest you get out from under the rock you’ve been living and get down your local and ask for a double on ice. Sip it, little sips, let it flow over your tongue and really enjoy the delicious orangeness of it all. Now i’m  not being a killjoy by suggesting little sips, I am partial to a Cointreau on ice at home and if left unguarded it has a deadly habit of looking like a glass of melted ice water and some cubes. . poor DDH almost coughed up a lung when downing a rather large “ice water” by mistake. A valuable lesson was learned, don’t steal your wife’s drink even if you think she has finished it. 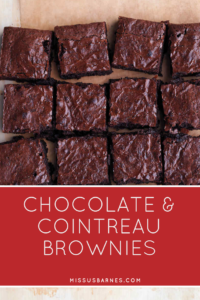 Use a trained monkey to slop this all into a bowl and then set your elbow to Greased Lightening as you whir it all up. If you are fancy enough to have one of those KitchenAid doodahs I so covet . . don’t use it. Just mix it by hand, the smell that comes out of the bowl will power you through until its smooth and you can’t see any lumps ( except the peel).

Then gently spoon it all into a greased 20cm square brownie pan ( you could ask the monkey to grease it while you mix . . ) and pop in the oven for half an hour. I am going to warn you, this is the longest thirty minutes EVER as they will start to smell pretty delicious after about 7 minutes and then its just an exercise in self restraint to keep away!

When you can’t wait anymore or if you’ve made it to  the 30 minutes as dictated on the box. Bring them out and prod them with a knife – it should come away clean so you know its all cooked. The top should be a little crusty.  Now with that new found self control you have to wait until they are cool before you cut them out.

And then as they say in the cartoons, “That’s all Folks” – I won’t judge you if you eat them all in one sitting. . . promise 😉 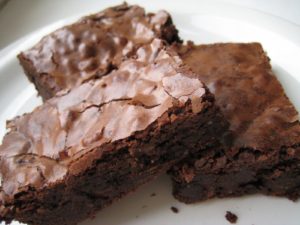